In this paper, we propose a physics-based model of suction phenomenon to achieve simulation of deformable objects like suction cups. Our model uses a constraint-based formulation to simulate the variations of pressure inside suction cups. The respective internal pressures are represented as pressure constraints which are coupled with anti-interpenetration and friction constraints. Furthermore, our method is able to detect multiple air cavities using information from collision detection. We solve the pressure constraints based on the ideal gas law while considering several cavity states. [PDF][VIDEO][ACM]

Planning of soft-rigid hybrid arms in contact with compliant environment: application to the transrectal biopsy of the prostate

In this study, a rigid robot is hybridized with a soft part to improve its properties of relative positioning and safe interaction. While the design of the device is quite simple, the kinematics, on the other hand, becomes complex. Pre-operative planning of such a robot is a challenge that is faced in this paper. The clinical context is the automation of transrectal prostate biopsy: a robot is connected to a thin ultrasound (US) probe instrumented with a needle through a flexible silicone part. The procedure consists of: moving the probe near the prostate through the rectum, aligning the probe with identified lesions in the prostate, and shooting the needle to collect tissue samples. In this paper we demonstrate in simulation the feasibility of our methods to solve the planning of the entire procedure. [IEEE][VIDEO]

Inverse kinematics of soft robots in their environment.

In opposition to traditional rigid robots, soft robots are built from highly compliant materials, which makes them safe for manipulating/interacting with sensitive environment. The field of soft robotics brings new challenges, in particular for modeling and control. Within this document we detail the methods we propose to answer them. The methods are based on the finite element methods to capture the deformations of the robot’s structure, and of its environment when deformable, and we formulate the problem of their inverse kinematics as an optimization program. The methods are tested on different case studies, in simulation, as well as on a real robot. [LINK]

We use a finite element model to predict the vibration response of objects in a rigid body simulation, such that rigid objects are augmented to provide a plausible elastic collision response between distant objects due to vibration. We start with a generalized eigenvalue decomposition of the elastic model to precompute a response to an impact at any point on an elastic object with fixed boundary conditions. Then, given a collision between objects, we generate an approximate response impulse to distribute to other objects already in contact with the colliding bodies. This can lead to distant impacts causing an object to slip, or a delicate stack of objects to fall. [PDF] [VIDEO] [PAGE]

We reduce computation time in rigid body simulations by merging collections of bodies when they share a common spatial velocity. Merging relies on monitoring the state of contacts, and a metric that compares the relative linear and angular motion of bodies based on their sizes. Unmerging relies on an inexpensive single iteration projected Gauss-Seidel sweep over contacts between merged bodies, which lets us update internal contact forces over time, and use the same metrics as merging to identify when bodies should unmerge. [PDF] [ACM] [VIDEO] [GITHUB PAGE] 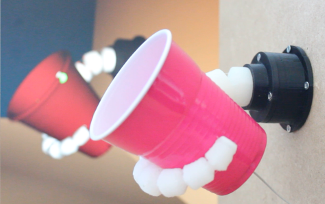 In this paper, we propose a method to control the motion of soft robots able to manipulate objects or roll from one place to another. We use the Finite Element Method (FEM) to simulate the deformations of the soft robot, its actuators, and surroundings when deformable. To find the inverse model of the robot interacting with obstacles, and with constraints on its actuators, we write the problem as a quadratic program with complementarity constraints. The novelty of this work is that friction contacts (sticking contact only) are taken into account in the optimization process, allowing the control of these specific tasks that are locomotion and manipulation. [PDF] [VIDEO]

Soft robotics draws its inspiration from nature, from the way living organisms move and adapt their shape to their environment. In opposition to traditional rigid robots, soft robots are built from highly compliant materials, allowing them to accomplish tasks with more flexibility and adaptability. They are safer when working in fragile environment. They have the advantages of producing low forces that are suitable for manipulating/interacting with sensitive objects/surroundings without harming them. These characteristics allow for potential use of soft robotics in the fields of manufacturing and medicine. The field of soft robotics brings new challenges, in particular for modeling and control. Within this thesis we aim at providing generic methods for soft robot modeling. [LINK] [PDF] [GITHUB]

In this paper, a method for dexterous manipulation of 3D soft objects for real-time deformation control is presented, relying on Finite Element modelling. The goal is to generate proper forces on the fingertips of an anthropomorphic device during in-hand manipulation to produce desired displacements of selected control points on the object. The desired motions of the fingers are computed in real-time as an inverse solution of a Finite Element Method (FEM), the forces applied by the fingertips at the contact points being modeled by Lagrange multipliers. The elasticity parameters of the model are preliminary estimated using a vision system and a force sensor. Experimental results are shown with an under-actuated anthropomorphic hand that performs a manipulation task on a soft cylindrical object. [PDF]

Software toolkit for modeling, simulation and control of soft robots.

The technological differences between traditional robotics and soft robotics have an impact on all of the modeling tools generally in use, including direct kinematics and inverse models, Jacobians, and dynamics. Due to the lack of precise modeling and control methods for soft robots, the promising concepts of using such design for complex applications (medicine, assistance, domestic robotics…) cannot be practically implemented. This paper presents a first unified software framework dedicated to modeling, simulation and control of soft robots. [LINK] [PDF] [GITHUB] 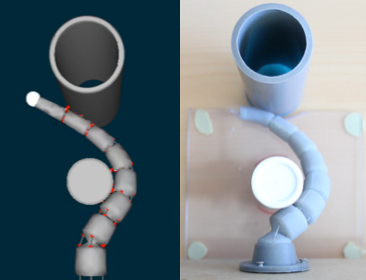 This paper presents a physically-based algorithm to interactively simulate and control the motion of soft robots interacting with their environment. We use the Finite Element Method (FEM) to simulate the non-linear deformation of the soft structure, its actuators, and surroundings, and propose a control method relying on a quadratic optimization to find the inverse of the model. The novelty of this work is that the deformations due to contacts, including self-collisions, are taken into account in the optimization process. [VIDEO] [PDF] [IEEE]

In this work we propose a new method for online motion planning in the task-space for hydraulic actuated soft robots. Our solution relies on the interactive resolution of an inverse kinematics problem, that takes into account the properties (mass, stiffness) of the deformable material used to build the robot. An accurate modeling of the mechanical behavior of hydraulic components is based on a novel GPU parallel method for the real-time computation of fluid weight distribution. [PDF]

Soft robotics is an emerging field of robotics which requires computer-aided tools to simulate soft robots and provide models for their control. Until now, no unified software framework covering the different aspects exists. In this paper, we present such a framework from its theoretical foundations up to its implementation on top of SOFA, an open-source framework for deformable online simulation. [PDF] [IEEE] [GITHUB]

Purpose. This paper introduces a new methodology for semi-automatic registration of anatomical structure deformations. The contribution is to use an interactive inverse simulation of physics-based deformable model, computed in real-time.
Methods. The method relies on non-linear Finite Element Method (FEM) within a constraint-based framework. Given a set of few registered points provided by the user, a real-time optimization adapts the boundary conditions and(/or) some parameters of the FEM in order to obtain the adequate geometrical deformations. [PDF] [SPINGER]

Finite Element analysis can provide accurate deformable models for soft-robots. However, using such models is very difficult in a real-time system of control. In this paper, we introduce a generic solution that enables a high-rate control and that is compatible with strong real-time constraints. From a Finite Element analysis, computed at low rate, an inverse model of the robot outputs the setpoint values for the actuator in order to obtain a desired trajectory. This inverse problem uses a QP (quadratic-programming) algorithm based on the equations set by the Finite Element Method. To improve the update rate performances, we propose an asynchronous simulation framework that provides a better trade-off between the deformation accuracy and the computational burden. [PDF] [IEEE] 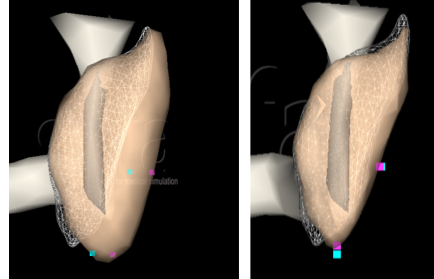 We introduce a new methodology for semi-automatic deformable registration of anatomical  structures, using interactive inverse simulations. The method relies on non-linear real-time Finite Element Method (FEM) within a constraint-based framework. Given a set of few registered points provided by the user, a real-time optimization adapts the boundary conditions and(/or) some parameters of the FEM in order to obtain the adequate geometrical deformations. [VIDEO] [PDF] [SPRINGER]